There are times when I don't think I can stand feeling like this, and then there are times when I think I'll be okay. I get triggered both ways. I have some very good friends who have been very helpful to me since Stimpy died (I'm forcing myself to say it that way, rather than simply saying I lost him - I have to accept it). +Steve Kovacs who is the host for The Kovacs Perspective, for which I am the producer, has been a very supportive friend, and he dedicated the last episode of his show to Stimpy. It was something totally unexpected. I knew he loved animals, and understood what I was feeling, but I didn't expect him to do what he did. The station manager +Len Azzarone put together the graphics and put up Stimpy's picture on the show, and posted a comment on my last blog posting to say that he was thinking of me. He, too, is an animal lover, and I very much appreciate the thought and extra work he put into the show for me and for Stimpy.

+susan thom has been checking in on me every day, talking me through it, as well as sending me cheerful pictures of her and her daughter (who is visiting before she's shipped out to Germany). +Marlin Woosley has been very supportive and understanding as well, unknowingly cheering me up with a picture of himself and his granddaughter, as well as talking to me online and letting me know to take my time.

Another friend, +Susie Riddle, has been a friend for a number of years, and she used to call herself Stimpy's aunt. She never met him in person, as she runs the WeezleWings Ferret Sanctuary in Texas, but she loved him anyway. She loves all ferrets. I lost touch with Susie for a couple of years, but about a week before Stimpy died we got in contact again, and having the Weezle group she runs on Facebook has been good for me. I'm getting back in touch with the ferret people again. All of this helps.

Thank you to everyone who has been so understanding, and those who have gone to such extra effort to make this time as easy for me as possible.

My daughter shares my very deep grief for Stimpy. (I don't publish her name for her own good - she wouldn't enjoy the publicity.) Just knowing that someone else is feeling what I'm feeling is helpful, except I don't like the idea of her suffering either. Still, death is a part of life that we all must get used to. I don't consider the death of a pet to be practice for 'the real thing' of human death, because I consider my pets to be as important as humans. I know what it's like to have a child, and I love my pets as much as I love my daughter. They're a vital part of my life, and losing one of them really is like losing a child for me. I don't care what anyone says about that. If they don't have that connection with animals themselves, that's their business, and my connection to animals is my own.

Pepper, my second ferret, is a crazy little bug. He seems to have handled Stimpy's death with his usual aplomb. For the first couple of days he was sleeping a lot, and was somewhat quiet. He seems to have recovered, however, and spends a fair bit of time bouncing around like he used to do. I'm thankful for this, because he makes me laugh, and that's something I badly need right now to break up the extended periods of sorrow. I made sure that Pepper saw Stimpy's body after he died. He laid on top of him for a minute or two, and seemed to understand. He'll poke his head inside the octopus toy every once in a while, so I'm not sure if he's forgetting that Stimpy's not in there anymore, or if he's debating on whether or not to go inside it.

There are things I still need to talk about when it comes to Stimpy's death, so I will continue to share those things on here. There isn't much else on my mind right now. I did manage to get myself into the book series I mentioned a couple of posts ago - the one written by Tess Gerritsen, which means I have something to distract me a bit, since I have several books from the series in paperback form, as well as some in e-book form. I'm not too keen on reading on my computer right now, though. I've actually been shutting it off quite a bit to go lie down with a book.

Getting away from the computer is probably a good thing, but if I know myself at all, I know I'll probably be back in the habit of being on it all the time once I've gotten past the worst of my grief. Right now I'm very, very sad. I won't say I'm depressed, because depression is not sadness. Depression can be the result of repressing your emotions. Or suppressing them if you prefer. Depression can be clinical in the form of brain chemistry imbalances as well. Being sad is not being depressed. If you're depressed you feel pretty much nothing at all. Right now I'm feeling a whole hell of a lot, and as painful as it might be I also know that it's better to feel these things now. I spent a lot of years when I was quite a bit younger, not caring about anything at all, including myself. I had to fight to regain my emotional health.

As much as I've been through in my life, many people would be surprised to know that having Stimpy die is probably the most painful thing I've ever gone through. I allowed myself to form a bond with him that I've never had with an animal before. Having him there during what could have been the worst five years of my life made them the best five years. He turned everything around for me when I might have lost myself otherwise. He made me smile and laugh every single day. I remember all the little things he did, and even now when the loss of him is so painful, those things make me smile still.

Pepper decided to 'pull a Stimpy' yesterday, by digging his way into my sub-woofer. It was something Stimpy did just after I got him. I had to use my drill to break into the speaker box in order to get him out because he was stuck in there. When I reassembled the sub-woofer I made sure I put fabric over the air hole so Stimpy couldn't get into it again. He damn near gave me a heart attack when he did that, but he came out none the worse for wear. The sub-woofer sat there, perfectly safely I thought, until Pepper managed to get the fabric yanked out of the way last night. At least this time the sub-woofer disassembled quite easily, thanks to the holes I drilled into it because of Stimpy. Pepper was already on his way out of it, though.

These kinds of messages amaze me sometimes. This is the first time Pepper has actually managed to get into the sub-woofer in all this time. We actually thought his body was a bit too big for him to get in there, to be honest. Still, he managed it, and it felt a bit like he was channeling Stimpy's spirit, as if to say, "See, I'm okay!" I don't care if I'm fooling myself. The messages help. If I can think of him as being safe and happy somewhere, it eases my pain, and if I feel like he's still communicating with me, so much the better.
Posted by Torrential Rain at 11:14

Please keep your comments respectful, without strong profanity, or they will not be published. Thank you. 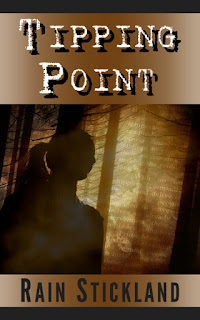 Click here to buy! Only $0.99 on Kindle or free to borrow! Also available in paperback. 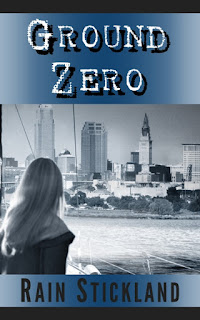 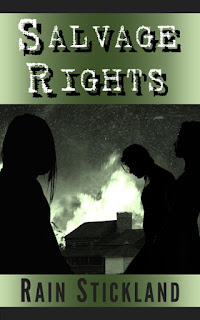